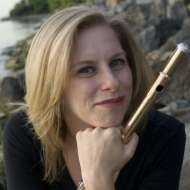 Heather Garcia (Holden), first prize winner of the Haynes International Flute Competition, has gained attention as an elegant and vivacious musician. Hailed for her “full-bodied and supple tone” by Guitar Review, she performed her New York Carnegie Hall solo debut in as a winner of the Artist International Debut Recital Series.   Later, she was sponsored by the Italian cultural foundation, Circostanze, for a recital series in Florence, Italy, and was featured in recital on Italian National Television.  As a winner of the Manhattan School of Music Concerto Competition, Heather performed as soloist with the Manhattan School of Music Symphony.

In demand as a chamber musician, Heather has performed at the Cooperstown Chamber Music Festival, Kingston Chamber Music Festival, New Hampton and Caramoor Music Festivals.  She was a fellow at the Norfolk Music Festival, National Repertory Orchestra and Spoleto Festival in Italy.  Her recitals have been broadcast on NPR’s ‘Performance Today’.  Heather was a founding member of the award-winning Arc Duo, which performed for almost two decades throughout the United States, Europe and Canada.  Performance highlights include recitals at Carnegie Hall, Merkin Concert Hall, and Lincoln Center’s Bruno Walter Auditorium.  Arc Duo was awarded a Chamber Music America Residency Partnership Grant for its Outreach work with the Lenox Hill Neighborhood House and was an ensemble in residence at The Diller-Quaile School of Music for over ten years.

New York Concert Review has called Heather “… a flutist who would be an asset to any orchestra or woodwind quintet." She received her B.M. from Boston University, and her M.M. from Manhattan School of Music.  Her principal teachers were Linda Chesis and Alan Weiss.  As a Haynes Faculty Artist, Heather has been sponsored to teach masterclasses at numerous colleges and universities, most recently at Manhattan School of Music.  Heather currently lives in Zürich Switzerland, where she teaches and performs. Her recordings can be heard on the Azica label.