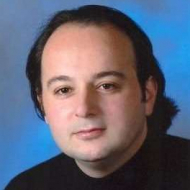 Djordje
Milojkovic
1213 Onex
Ginevra
Genève
Pianoforte
Inglese Francese Russo
076 343 88 54
djordje.milojkovic@gmail.com
Djordje Milojkovic started to play piano at the age of five. Primary and secondary musical education gained in Nis. Considering him the most talented and the most perspective young pianist, Professor Arbo Valdma invites him in his class. At age of sixteen he passed entrance examination at the Music Academy of Belgrade, as the first on the list. By the end of his studies in Belgrade he won seven first awards. At 1988. he won at the festival ”Zmaj”, which was intended for students of various academies of Yugoslavia, for the best performance of Rachmaninov. At 1989. he was a winner of the competition ”E.P.T.A.” That was event which marked the beginning of his concert performances and affirmed him as the leading Yugoslavian pianist.
At 1990. in competition of sixty young pianists from all over the world, Maria Tipo (direct successor of Feruccio Busoni`s piano school) chose only Djordje for post-master studies (Virtuosité) at the Geneva Conservatory. From 1993. to 1996. Djordje continued his studies with Edith Fischer (the best student of legendary Claudio Arrau) and finished them with the highest possible qualifications. Milojkovic was an active participant in various master-classes, held by renowned pianists and pedagogues: A. Valdma (Russia), D. Bashkirov (Russia), B. Davidovich (USA), V. Krpan (Croatia), M. Tipo (Italy), S. Chelibidache (Germany), N. Goerner (Argentina) and E. Fischer (Switzerland).
In his presentations as a soloist in recital, or when accompanied by major symphony orchestras in Moscow, Saint Petersburg, Warsaw, Amsterdam, Geneva, Bern, Lausanne, Rome, Florence, Paris, London, Lyon, Copenhagen, Philadelphia, Houston, Austin, New York; Djordje Milojkovic always was a favorite of audiences and music critics. Eminent Swiss critic Jean Cossetto describes him as ”the phenomenon of the 21st century pianism whose interpretation is characterized by original and unique access toward the sound, music and instrument by itself, persuasiveness and power, purity of lines, the real musical cathedral inside rich pianistic invoice, expressive power and luxurious colors.”
As assistant of professor Valdma in Belgrade (1989-1991) and as leading professor in Geneva since 1992, Milojkovic is active and accredited member of Association of Swiss pedagogues and main expert at the Swiss Academy of Music and musical pedagogy. Milojkovic is the owner of extreme and unique pedagogical skill. He gave over 90 master classes all over the world. He was founder and director of prestigious Academy in Switzerland” L`école Traditionnelle Russe de Piano” whose concept is based on the synthesis of current leading directions of piano pedagogy, modeled on work of Anton Rubinstein, founder of Saint Petersburg Conservatory. One of the main goals of his work is passing rich pianistic heritage of Beethoven and romantic heritage of Claudio Arrau (pupil of Martin Krause, pupil of Liszt) and specific Busoni`s aesthetics on the next generations. Milojkovic was founder, director an exclusive sponsor of festival ”International Academy Arbo Valdama” in Switzeralnd at the Hindemith House.
Currently, he is Artistic Director of Dinu Lipatti Memorial and Professor at Kalaidos University of Applied Sciences in Zurich.