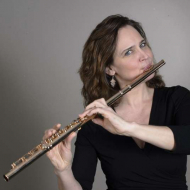 As young child growing up in Basel and Berne, Regula Zürcher discovered early on her talent and passion for music. She honed her skills at the recorder, piano and flute with enthusiasm and ambition. Following the completion of her Matura, Regula pursued her higher education as a flutist under the guidance of Heidi Peter-Indermühle and Beat Wenger in Berne. Master Classes and further studies followed, with such renowned artists as Lukas Graf, Verena Bosshardt, Pierre-André Bovet and Marianne Stucki. She continued her pursuit of excellence in improvisation with, among others, Paolo Knill, Hans-Helmut Decker-Voigt, Günther Wehinger and Markus Stockhausen. Regula completed her Concert Diploma with Marianne Stucki in Winterthur.

In addition to her precision and grace as a trained concert musician, Regula has studied Expressive Arts Therapy in Zurich and pursued a specialization in Education and Music Management in Berne. Her further education in these fields culminated in the attainment of her Master of Arts Degree in Expressive Arts Therapy from EGS (European Graduate School, Saas Fee). The topic of her thesis was “Intuitive Musicality.”

As an independent artist Regula cultivates her exceptionally expressive musical style through her involvement as a flutist in various classical and experimental chamber music formations, as a featured soloist as well as in ad hoc orchestra ensembles.

Regula inspires and instructs students of all ages at the Musikschule Bantiger, Bern. At her atelier she founded in 2009, she seeks to promote intuitive musicality and provides education and support in Creative Conception, Project Management and Mental Training for experts in a wide variety of artistic, pedagogic and social fields.